227 sent 16 Lancasters out to attack the Dortmund-Ems Canal with no loss. Roy was accompanied by F/O Nelson flying second Dickie. On this evening raid, 123 Lancasters and 5 Mosquitos of No 5 Group. No aircraft lost. The canal near Ladbergen was attacked, some of the Lancasters coming down to 4,000ft to get beneath the cloud. A breach was made in the only branch of the aqueduct here which had been repaired since the last raid and the water once again drained out of the canal.

227 sent 15 Lancasters out to attack Munich with no loss. On this night raid on Munich, 270 Lancasters and 8 Mosquitos of No 5 Group were assigned. 1 Lancaster crashed in France. Bomber Command claimed this as an accurate raid in good visibility with much fresh damage, particularly to railway targets. It has not been possible to obtain a local report.

227 sent 16 Lancaster out to attack Heinbach with no loss. 233 Lancasters of No 5 Group and 5 Mosquitos of No 8 Group bombed Urft Dam. Hits were scored but no breach was made. 1 Lancaster lost. 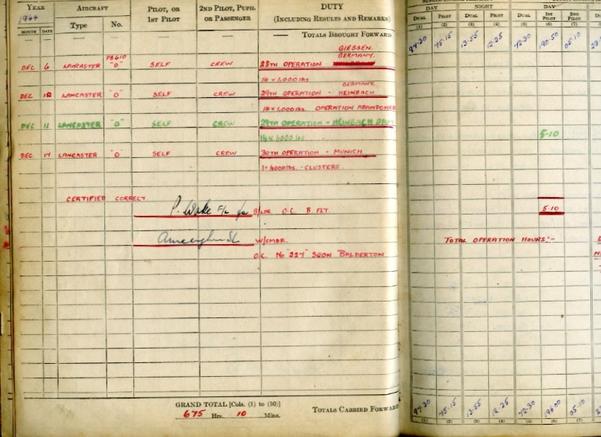 227 sent 18 Lancasters out to attack Giessen with sadly  two losses. On this night raid on Giessen, 255 Lancasters and 10 Mosquitos of No 5 Group were assigned. 8 Lancasters lost. There were two aiming points for this raid. 168 aircraft were allocated to the town centre and 87 to the railway yards. Severe damage was caused at both places.

227 sent 16 Lancasters out to attack Munich with no loss. On this night raid, 280 Lancasters and 8 Mosquitos of No 5 Group were tasked. 4 Lancasters lost. Bomber Command claimed 'severe and widespread damage' in the old centre of Munich and at railway targets.

​This was the last flight of Roy's crew all together. They all went their separate ways. Although Roy and his crew were lucky in that there were few squadron losses on the ops they flew, far more were lost on the ops when they were rested. There were so many losses in fact that Roy was offered the job of Squadron Leader at the end of his tour. This didn't sit well with Roy. According to my mum, Jean, Roy was unable to delegate. He wouldn't or couldn't send a crew out to what might be their deaths whilst he wasn't flying the op himself. Roy's crew had done their duty completing their tour and Roy didn't want to fly with another crew, so to continue to do his duty, Roy would move to 1690 Bomber Defence Training Flight.

Roy was awarded the Distinguished Flying Cross for skippering his thirty operations.

A few pieces of interest of the other crew members follows on the next page.