​​​​After a kind gentleman, by the name of Anthony John Robinson, sent me the link to the full taped interview by Kevin 'Snowy' Biltoft about his time flying with Roy it has become clear why Roy acquired his crew.  Snowy relates that when his original pilot was lost in their orientational flight, the normal practice for a pilotless crew was for them to remain with the squadron and split up to finish their tour flying in place of crew members who were injured or ill. Snowy and the crew were reluctant to be split up preferring to remain a crew together. Their commanding officer at 467 respected their wishes and sent them back to Syerston to see if they could find a pilot. At No.5 Lancaster Finishing School, Syerston, they found a pilot who had been dumped by his crew. The adjutant there said that they didn't recommend him as a viable pilot and suggested that they didn't take him, however, desperate to remain together, they decided they would let him take them on a few circuits of the field. They didn't see anything wrong with his flying and decided that they would take him on. Roy was that pilot dumped by his original crew of Tanner, Huish and Harrison. It is not known why they dumped him but Roy always said that the RAF at that time still had the public school mentality, saying that they had taken all the Lords, and royalty, the Oxbridge boys and the upper class, now nearing the end of the war, all they were left with was Roy, a hairy-arsed welder from Chesterfield. Maybe he didn't fit in with the rest, I don't know.

​It is also not known what happened to Tanner, Huish and Harrison, without first names it would be very difficult to find out. 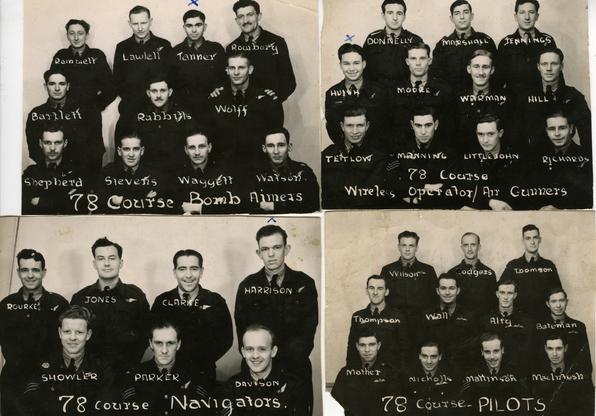 We believe that these men,​​​​Tanner, Huish, and Harrison, were Roy's allotted crew at OTU however there doesn't appear to be any photos of the two air gunners that would make the crew up to six. I say believe because it is really a best guess. This wasn't the crew that Roy would take up on his first operation at 619 squadron.

​I have researched this photo further on the page 'Roy's Lancaster crew' click on it to follow. 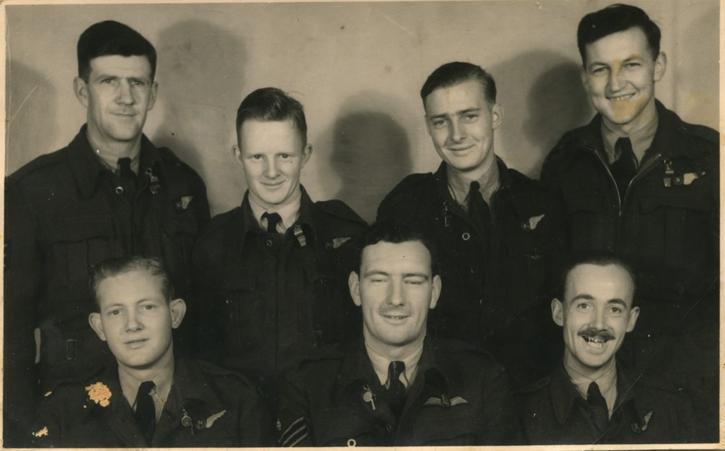 Back in Blighty at Number 7 Personnel Reception Centre, Harrogate, Yorkshire. The next stage of his progress was a posting to No. 18 (Pilots) Advanced Flying Unit RAF ((P)AFU). This was the first unit to operate from RAF Snitterfield starting on 7 May1943, officially stationed at RAF Church Lawford and using Snitterfield as a satellite airfield to disperse the aircraft as

Church Lawford was very busy. The whole of Roy's time here was spent using Airspeed Oxfords. Many exercises were conducted including BAT courses (Blind Approach Training) a modern day equivalent of an ILS landing I suppose.​

Roy was posted to 17 OTU on the 25th January 1944. Operations Training Units were where airmen of different trades were organised into crews. Each new intake of 600 airmen would arrive as strangers to each other, but leave only a few weeks later as part of a six-man bombing crew. The Vickers Wellingtons were the airframe of choice here and exercises carried out consisted of circuits and landings, bombing runs and fighter affiliation, the latter something that Roy would play a great part in in the last year of the war. The above photo collage shows that Roy was on course 78 and looking closely, one airmen from each photo is marked with an x.

F/S John O'Driscoll with what would become Roy's crew at their HCU. Note the addition of the Flight Engineer, Sgt. Leonard 'Doc' Stokes front right

​​​​A new pilot would fly a second Dickey op with an experienced crew, as a second pilot to give him a feel for how an op progressed. It would count towards his tally op 30 ops for his tour, however they would usually fly the extra mission and still do all the ops with their crew. Roy didn't fly a second Dickie op, or rather if he did, he didn't record it, however during his tour, he did have some second Dickie's on board.

​When Roy arrived at No. 5 Lancaster Finishing School, Syerston on the 26th June 1944, he did so with the O'Driscoll crew, and so they started out their time with the most beautiful aeroplane ever made, the Avro Lancaster.

​The crew was now:

​Finishing school went on until ​20th July went they got their first posting to an operational unit - 619 Squadron, Ready for their first operation over occupied Europe​ 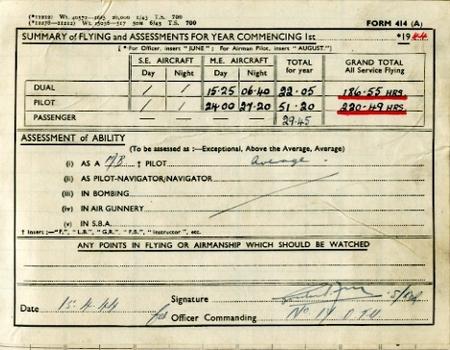 After a brief stay at RAF Scampton ACCS, from 19th April to 14th May, Roy moved to the 1660 Heavy Conversion Unit at RAF Swinderby. This unit converted the crews to the Heavy Bomber and it would have been here that the crew expanded to take on a flight engineer becoming a full crew of seven. I have no clue who the flight engineer would have been as I have said previously, for whatever reason, Roy started his tour with another crew.

​Flying a Short Stirling, Roy and his crew completed a number of pre-defined exercises designed to prepare them for their first bombing mission over occupied Europe. Although photos of crews at HCU were taken, one doesn't appear in my dad's papers.

​At some point, around this time, Roy gained a new crew. It is not known why and indeed I can't seem to find any information on it, but Roy inherited a crew who's Skipper was killed whilst flying a second Dickey mission over
Saint-Leu-d'Esserent in Northern France.