619 squadron sent 15 Lancasters​ without losses. 189 Lancasters of No 5 Group carried out one of the most successful No 5 Group attacks of the war on Königsberg at extreme range. Only 480 tons of bombs could be carried because of the range of the target but severe damage was caused around the 4 separate aiming points selected. This success was achieved despite a 20 minute delay in opening the attack because of the presence of low cloud; the bombing force waited patiently, using up precious fuel, until the marker aircraft found a break in the clouds and the Master Bomber, Wing Commander J Woodroffe, probably No 5 Group's most skilled Master Bomber, allowed the attack to commence. Bomber Command estimated that 41 per cent of all the housing and 20 per cent of all the industry in Königsberg were destroyed. There was heavy fighter opposition over the target and 15 Lancasters, 7.9 per cent of the force, were lost. Due to the distance of this raid, Roy might have had to land at RAF Fiskerton due to being low on fuel before returning to base.

​Later in Roy's career he would meet W/C Woodroffe again.

619 squadron sent 16 Lancasters​ without losses. 601 aircraft - 418 Lancasters, 147 Halifaxes, 36 Mosquitos - to attack 9 sites in Northern France where the Germans were believed to be storing V-2 rockets. 8 of the sites were found and bombed. 6 Lancasters lost. Auchy les Hesdin was such a site storing V-2's.​

Who'd have guessed that after the war, Darmstadt was to become the twin town of Roy's birth town, Chesterfield. It was perhaps a good job the raid wasn't too successful. however Roy and crew were attacked by a JU88 and the mid upper gunner, Aubrey Thomas, shot it down. 619 squadron sent 19 Lancasters​ without losses. 190 Lancasters and 6 Mosquitos of No 5 Group to Darmstadt which had not been seriously attacked by Bomber Command before. 7 Lancasters lost. This 'No 5 Group method' raid was a failure. The Master Bomber had to return early; his 2 deputies were shot down; the flares were dropped too far west and the low-level Mosquito marker aircraft could not locate the target. 95 buildings were hit and 8 people were killed by the scattered bombs which did hit Darmstadt. 33 of the Lancasters bombed other targets, including at least 13 aircraft which joined in the successful raid on nearby Russelsheim.

​This is the first mention of a Master Bomber. In July 1942 a young and very experienced pilot, Wing Commander Donald Bennett approached Harris with a remarkable idea. He would form a special squadron of crews coming back to flying duties from their first tour of missions. These he would train intensely to be Target Markers. This was an overnight success. With special target markers of varying colours(To stop the enemy setting false ones) the main bomber stream could see the target from miles away, and supposedly bomb with accuracy.
Soon however a new problem arose. It was all well and good the Pathfinders marking the target accurately, but bombing was starting to creep back from the markers, sometimes to a distance of five miles!.
Bennett realised that someone would have to circle the target and direct the aircrew where to bomb. Not the most pleasant of tasks, but needed none the less. Thus was born the Master Bomber.
The Idea was not entirely new. Guy Gibson had done precisely the same task in the Dams Raid of May 1943.
At First the task was carried out by an appointed Pathfinder in the first wave of target markers. Flying at first a normal Lancaster Bomber, he would asses how accurate the markers were and then, circling the target he would talk to the incoming bombers on radio, and correct their bombing. Not a pleasant task, as circling the target would mean your aircraft stood out from the main stream by it's actions alone. This would allow radar controlled anti-aircraft guns to single this aircraft out.
From 1944 most pathfinder squadrons flew the wooden Mosquito aircraft, thus were able to fly numerous spoof raids to different targets to confuse the night defences, plus it made the job of the master bomber a little safer as the aircraft did not show up so well on the German radars. It is said that a German night fighter pilot shooting down a Mosquito, would be credited with two 'Kills' Which shows how annoying these aircraft were to the Germans.
Undoubtedly, anyone who flew a bomber in world war two was a brave man. But to become a Pathfinder and ultimately a Master Bomber. Is well above the call of normal duty.​​

619 squadron sent 15 Lancasters​ without losses. 174 Lancasters of No 5 Group to Königsberg, which was an important supply port for the German Eastern Front. The route to the target was 950 miles from the No 5 Group bases. Photographic reconnaissance showed that the bombing fell in the eastern part of the town but no report is available from the target, now Kaliningrad in Lithuania. 4 Lancasters lost. Due to the distance of this raid, Roy might have had to land at RAF Ludford Magna due to being low on fuel. They flew back to base the following morning.

619 squadron sent 13 Lancasters​ without losses. 1,019 aircraft - 614 Lancasters, 392 Halifaxes, 13 Mosquitos - attacked five aiming points in front of Allied ground troops in Normandy. The attacks were carefully controlled - only 660 aircraft bombed and German strong points and the roads around them were well cratered. 10 aircraft - all Lancasters - were lost, 7 to German fighters, 2 to flak and 1 to an unknown cause. By now it had been around 2 months since the American forces had landed at Omaha beach yet had only penetrated 20 odd miles such was the ferocity of the German resistance. The American asked the RAF to bomb the tank positions in the woods near Secqueville. 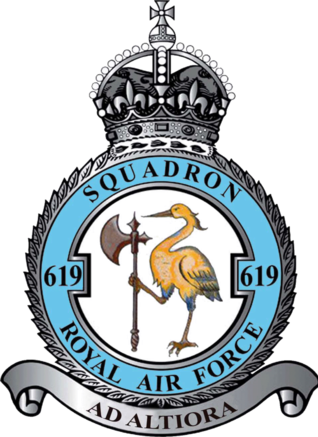