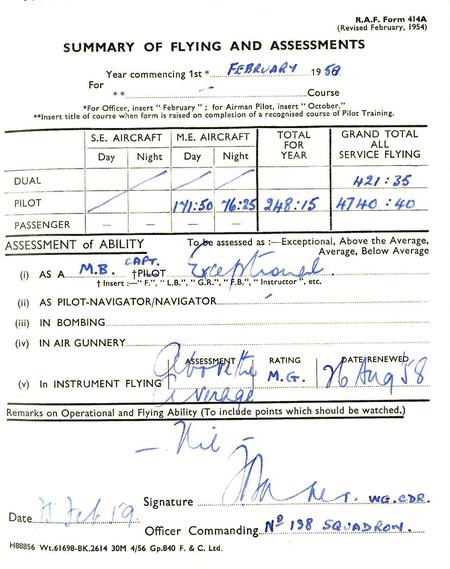 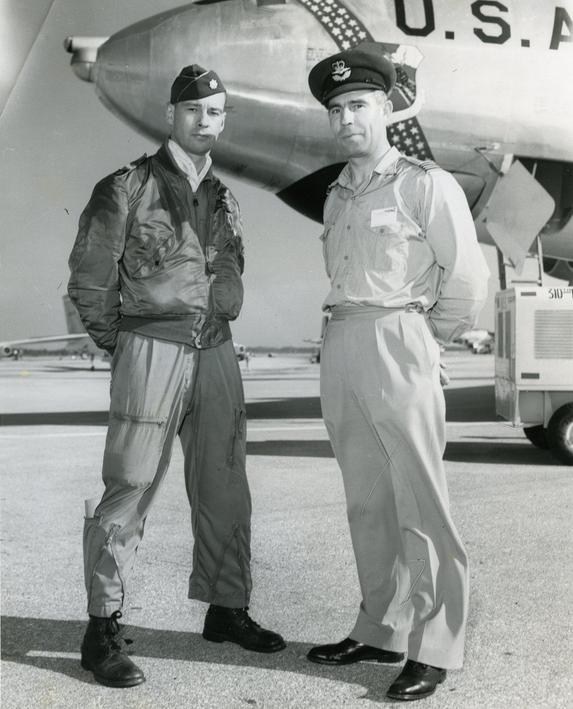 Roy and XD859, the plane he flew to Pinecastle. Note the ground crew tinkering with the drop tanks installed especially for the competition. 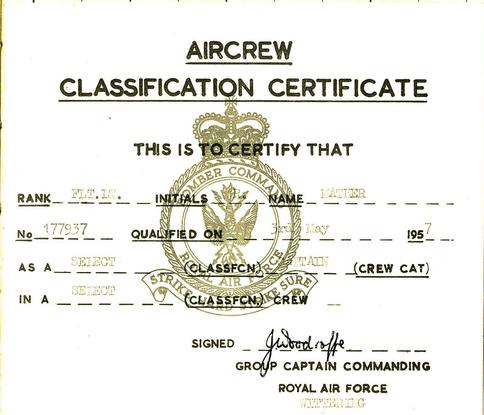 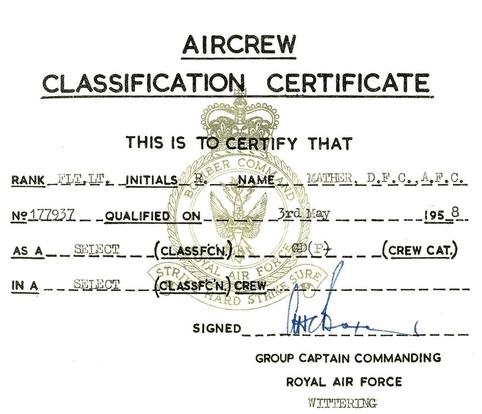 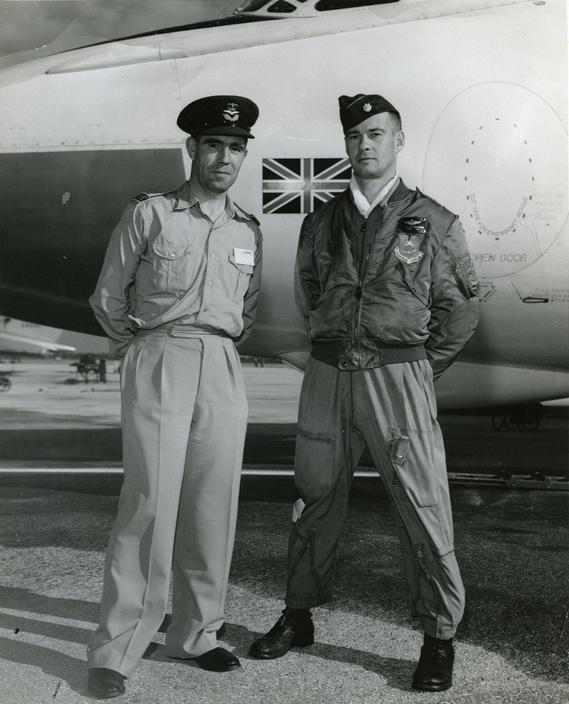 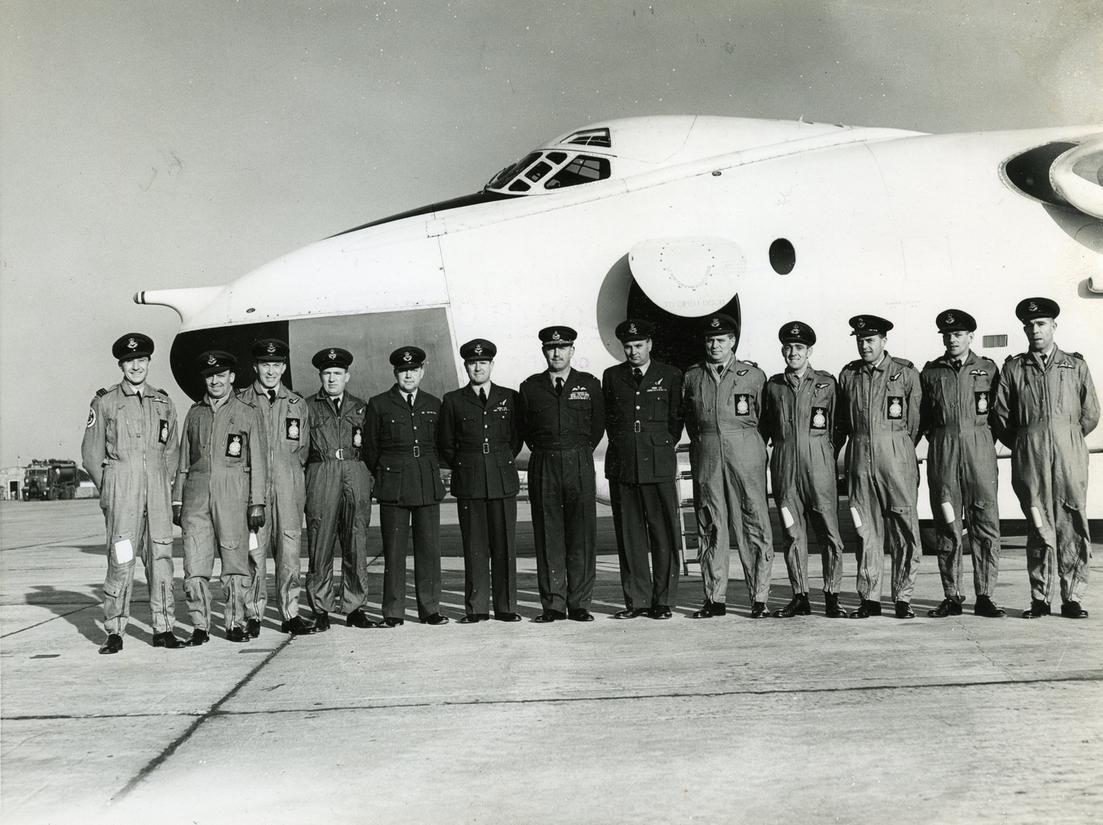 There was a sad episode that occurred during this trip which was the untimely death of the war hero and station commander at Wittering, Group Captain John Woodroffe D.S.O, D.F.C & Bar. G/C Woodroffe was in a B-47 Stratojet piloted by Col. McCoy.

Perhaps the most qualified B-47 pilot in the Air Force, Col. Michael N. W. McCoy, commanded the 321st Bomb Wing. He had 8,661 hours flying time and his co-pilot, Lt. Col. Charles Royce, had 3,855 hours. McCoy, an instructor pilot, had flown 1,093 hours in the B-47, while Royce had 813 hours in the aircraft. Both men had done well on recent proficiency checks. On Oct. 9, 1957, McCoy took off from Pinecastle AFB, Fla., in a DB47B, modified to carry the GAM-63 Rascal missile, with Maj. Vernon D. Stuff as navigator. The aircraft did not have ejection seats. The purpose of the flight was an instrument check for McCoy and an orientation ride Group Capt. Woodroffe.
The flight was conducted by visual flight rules, with little communication to or from the base after McCoy took off. A little after 11 a.m., the aircraft was reported seven miles west of Orlando, Florida, flying at an altitude of 1,500 to 2,000 feet, wings level in a descent. Shortly thereafter it was reported passing the Orlando Country Club in a left turn that became a vertical bank. The aircraft disintegrated about three miles from Orlando. All four men were killed. While much of the report remains blacked out, it is difficult not to infer from the context that Woodroffe was in the rear seat for his orientation ride. Either he or McCoy was flying the aircraft at low altitude and at high speed. The bomber inadvertently entered a descent, accelerating to a speed that pushed it beyond the point of safe recovery. A violent effort to reverse the turn caused the aircraft to disintegrate. It was a sad end to a great career for McCoy, and a reminder of just how dangerous the B-47 became with an inattentive pilot, however skilled. 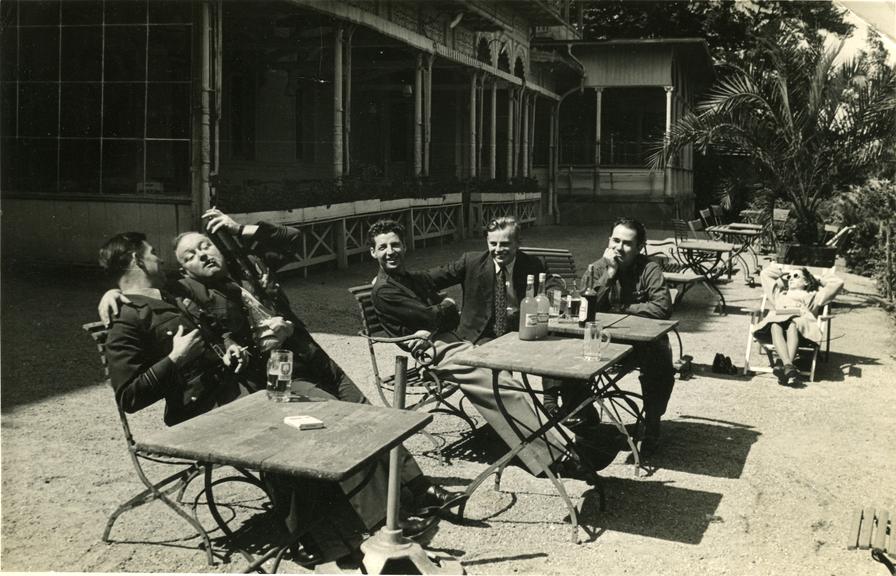 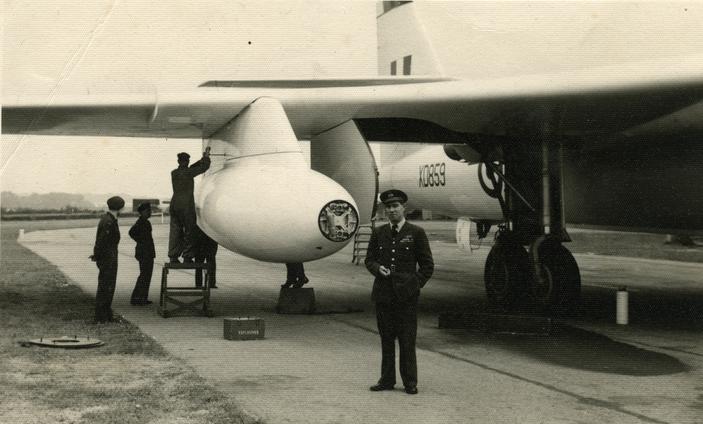 The RAF crews performed abysmally in the competition. Although S/L Payne came 11th overall, Roy came 75th and the two Vulcans 81st and 84th out of 90 crews. This poor showing was blamed on numerous things like inexperience of the ground crews maintaining the equipment, problems with the NBS and an imposed maximum ceiling of 30,000 feet which especially hampered the Vulcans, in fact both types were capable of flying at higher altitudes than the American machines. The main reason I believe was that the American crews had trained for three years leading up to the competition whilst the Valiant had only been in service since 1955 and the Vulcan less than a year with both types crews only training for the previous two months.

Roy's 138 squadron crew on the right, chosen to take part in the 1957 SAC Bombing Competition in Pine Castle, Florida

Roy continued to be an exceptional pilot

Roy and George Stratford enjoying the Florida sunshine and a drink or two.

In June 1957, in preparation for the upcoming Strategic Air Command Bombing Competition in Pinecastle, Florida, the RAF held a bombing competition of their own with the intension that the top crews represented the RAF in America. Although Roy and his crew came second in the competition with Wing Commander Oakley coming first, it was Roy's crew that was selected to represent 138 squadron. In October, Roy and a 214 squadron skipper Squadron Leader Ronald Payne, took their planes and crew across the Atlantic accompanied by two Vulcans from RAF Waddington. They flew via Goose Bay in Canada and on their final leg to Florida, They decided to test the American air defences. The two Vulcans were detected by the USAF but the American celebrations were curtailed when the Roy and the other Valiant radioed in saying they were over the White House undetected, or so the family story goes.