One of my favourites. Roy and his crew in a stage managed shot, leaving WP207 in Melbourne during Operation 'Too Right' 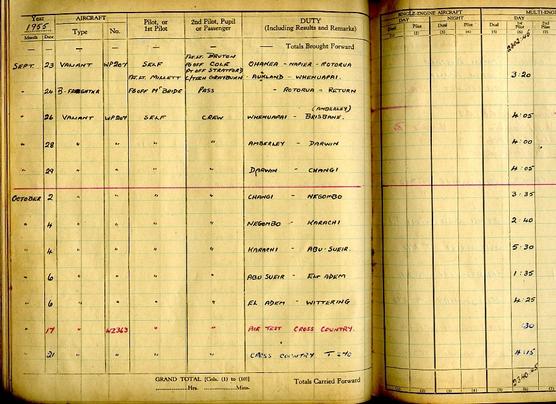 Roy talking to no other that Group Captain John Woodroffe, Officer Commanding RAF Wittering before embarking on Operation 'Too Right' September 1955 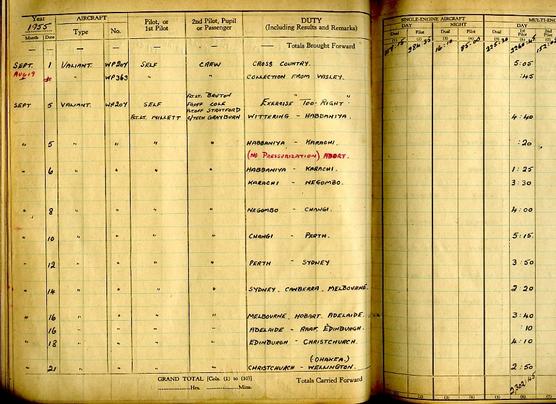 Not Too Right connected, but John Woodroffe would even sign Roy's swimming certificate 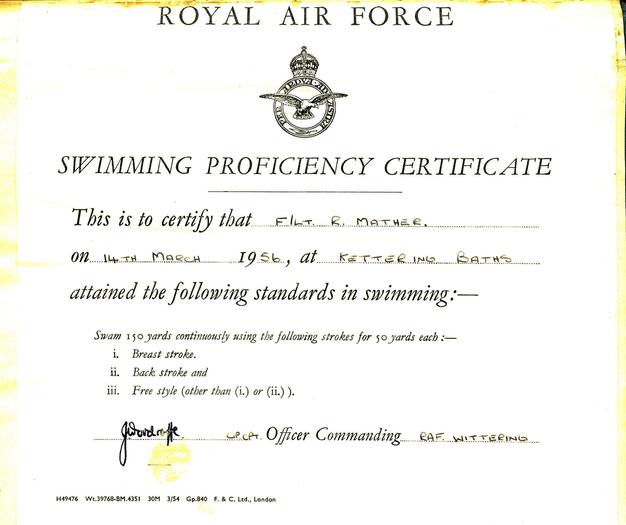 Click on the picture above to watch a Video of Roy and the crew landing at Mascot Airbase, Sydney 12th September 1955. Roy is first out of the aircraft followed by Barney Millet. 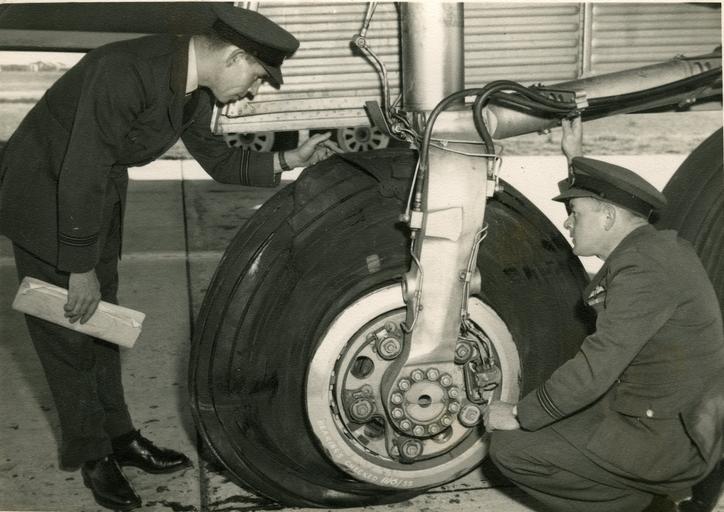 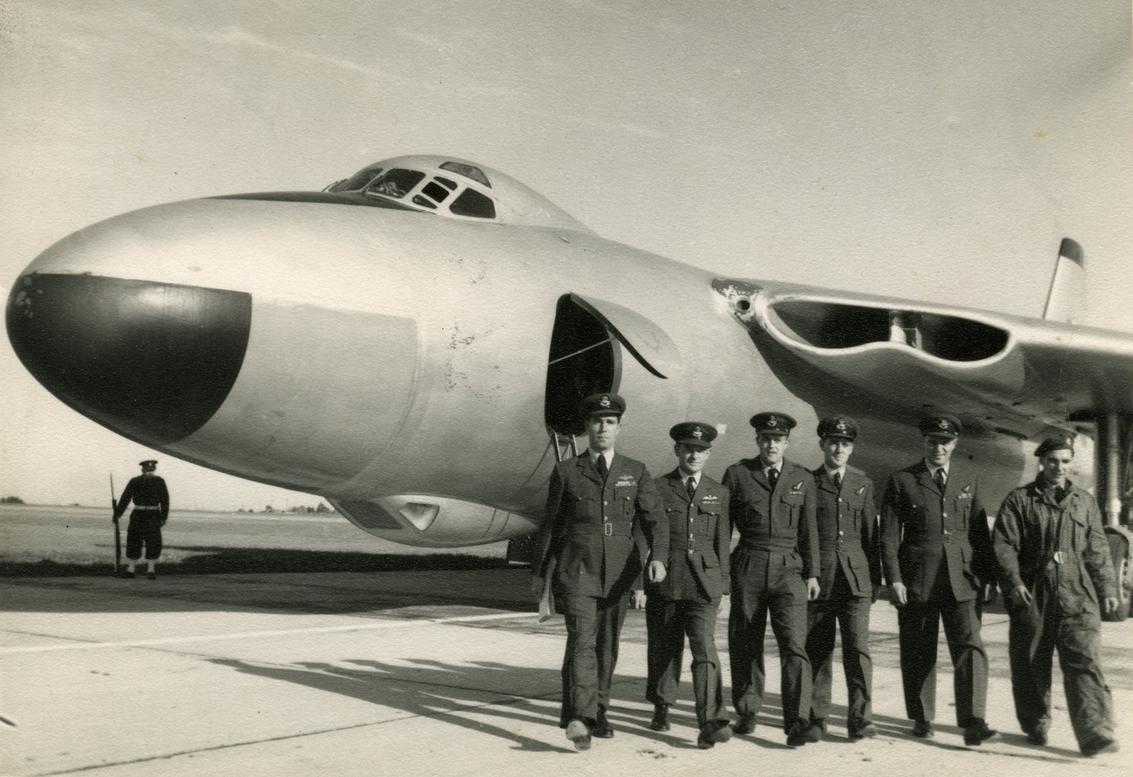 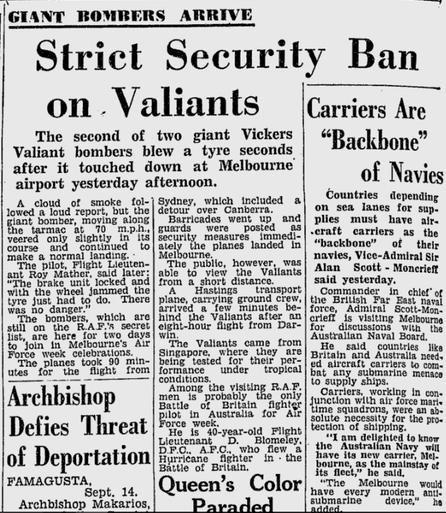 I said that it was an uneventful trip, but whilst landing in Melbourne Airport, a brake jammed on WP207 which ended in a tyre blowing out. Roy said to the press at the time : "​the brake unit locked and with the wheel jammed, the tyre just had to go. There was no danger"

It is fairly well documented that the trip over to Christchurch, New Zealand was fairly uneventful aside from the other Valiant, WP206, having an engine disintegrate and had to make an emergency landing at RAF Sharjah, in Trucial Oman. At the same time, Roy's plane, WP207, had to return to Habbaniya with pressurisation failure. The Australian and Kiwi press came in droves to see the two bombers wherever they flew. There is a gallery at the bottom of the page with some of the press clippings that Roy saved for you to click on to enlarge.

​David Sykes, who was a tiffy with the ground crew on the trip wrote on the V-Force reunion website about the mission been largely ignored by the British press and muses:

"We did have a serious case of misconduct during Too Right by one of the aircrew which compromised air safety. Could it be that this incident was effectively covered up by ensuring that all publicity was kept under wraps and the press kept away to prevent the story from emerging?"

​I have no idea what it was but it would be great to find out, let me know if anyone has any info. 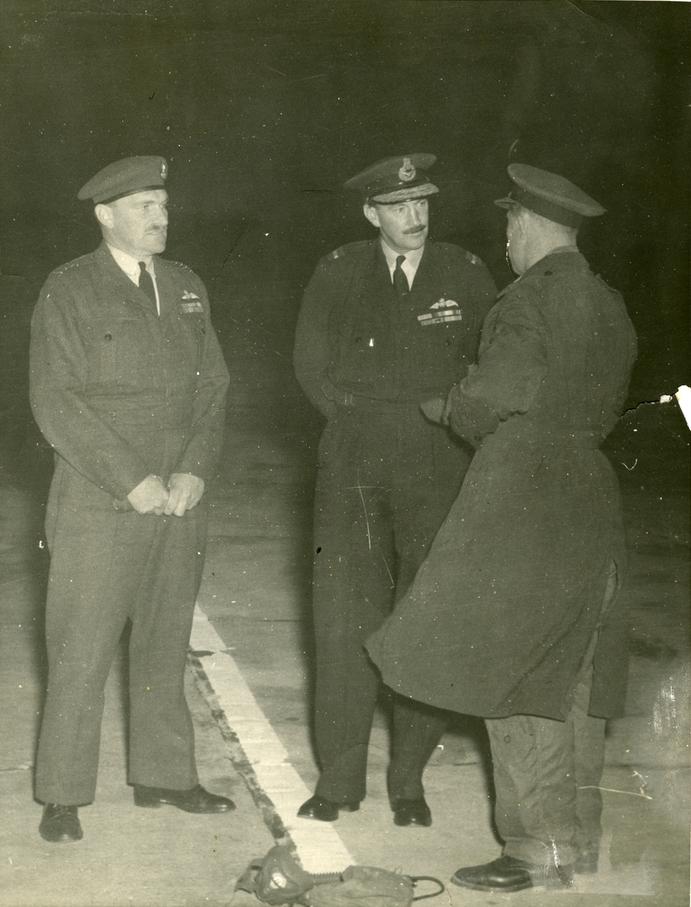 On the 5th September 1955, Roy and his crew, consisting of Flt. Lt. Kenneth John Bruton, F/O Peter Sydney Cole, P/O George Beadle Stratford, Chief tech Johnnie Grayton and Flt. Lt. Barney Millett, embarked on the first Valiant flight to Australia. The Valiant had a crew of five but there was a passenger seat installed for Chief Tech Johnnie Grayton.