It is always good to receive a photo of your dad that you had never seen before from 1944 not that it happens every day. This is Roy's first bomber crew at 17 OTU Silverstone

Whatever happened, Curly did find another crew and went on to complete his training and was also posted to 619 squadron on Friday the 15th of September. Roy and his crew were already one of the most senior crews at Dunholme Lodge at this time and had moved to 227 squadron by the time Curly and crew flew their 10th and final op to Gravenhorst. The whole crew were posted missing after their Lancaster ditched in the North Sea never to be recovered. Rest in Peace. 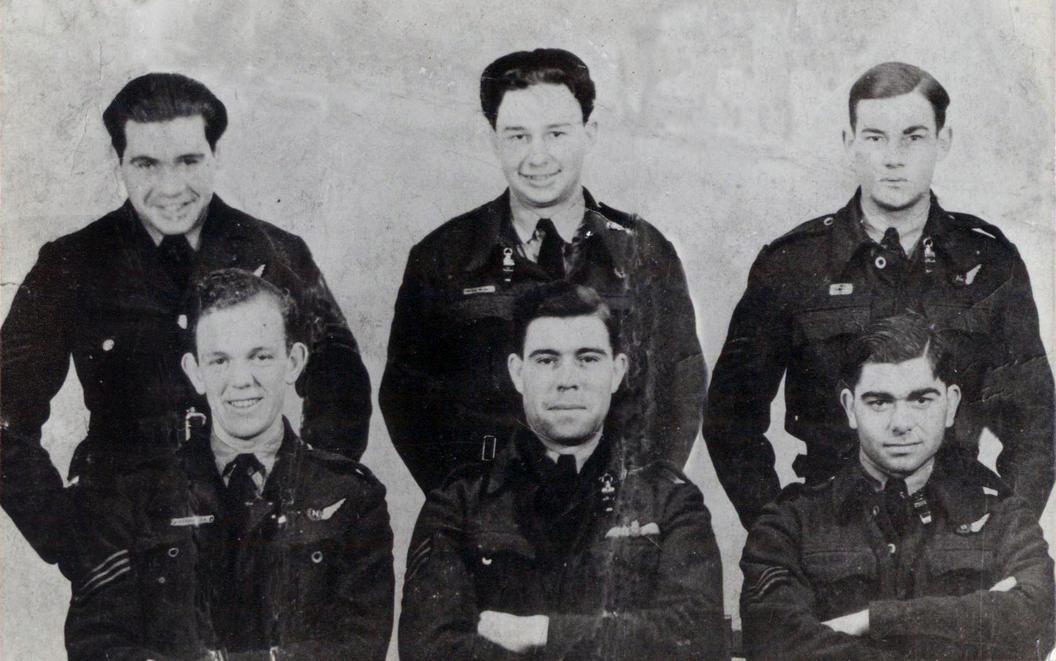 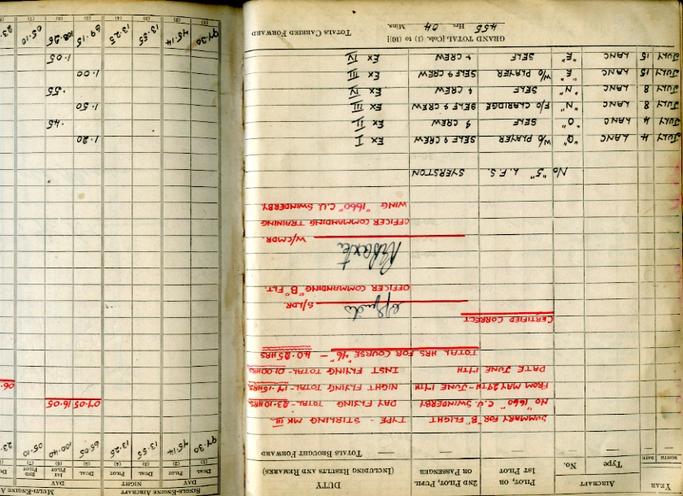 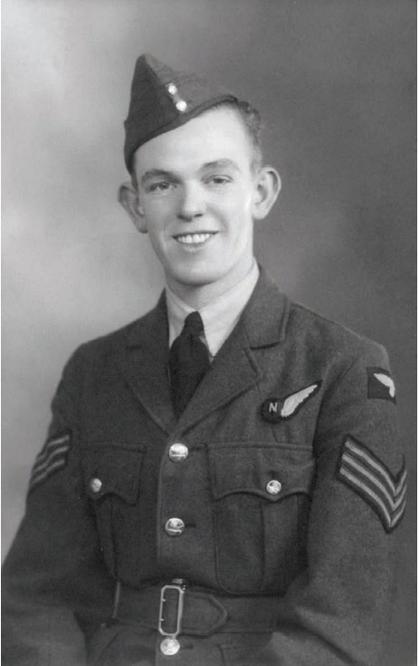 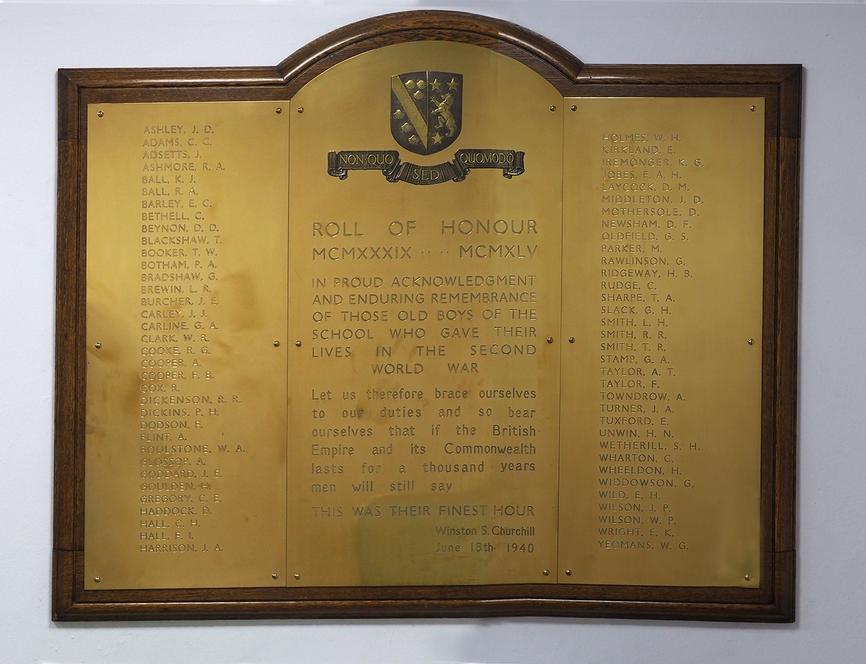 I had a random message one morning from the nephew of James Arthur 'Curly' Harrison, Peter Miles. One of Curly's brothers, another uncle of Peter's had written an excellent book about Curly and 619 squadron called 'In Memory of a Brother'. The book was written for the family primarily but I believe that he has opened it up to be available to anyone with an interest.

​This is an excerpt from the book explaining how Roy and Curly crewed up together at RAF Silverstone:

"Curly’s first flight from Silverstone was on the 10th February, flying as second navigator on exercises of Astro, and Direction finding Loop Position Lines. He carried out one day exercise and four at night. After that he crewed up in the same way as thousands of others had before him, and as others would continue to do. All the pilots, navigators, air bombers, wireless operators and air gunners irrespective of rank were all put in the same room and told to get on with it. As it happened Curly had already crewed up with a pilot, this was Sgt Roy Mather, an old Chesterfield Grammar School boy like himself. Although they had been in different forms at school, each had recognised one another. They soon picked up the other four members of a crew, these were ; Les Tanner a bomb aimer, who was a short dark haired Londoner; Bill Hamish a wireless operator, tall with fair hair and came from Scotland; Lucky Skeat, a rear gunner, another Londoner who was stocky and well built, and the mid upper gunner was Dick Flair from Winchester, tall fair haired and good looking. They were then posted to ‘A Flight’ at Turweston airfield, a satellite of Silverstone. This airfield had been transferred on July 3rd. 1943 from 13 OTU, and was situated approximately 3 miles NE of Brackley and 4 miles SW of Silverstone. At OTU the individual of each air crew trade came together and had to start flying as a crew, something which none of them had done before and conversion to an aircraft larger than any had previously been in. Curly’s work was just a matter of checking their position as the flights were mostly for the pilot’s benefit, circuits, landings and formation flying. After 3 of these flights there followed 4 high level bombing flights 3 by day and one by night. The next 6 flights were again circuits and landings 5 by night and one by day. Then one more high level bombing and one engine flying the last 2 night flights were timed bombing runs. Ten flights by day with a total flying time of 16.10 hrs and 8 by night with a total flying time of 8.10 hrs, the crew spent 17 days at Turweston. "

The author might have got Bill Hamish's name wrong as my own crew photo at 17 OTU clearly reads 'Huish' on it.

​"Curly and his crew played a very small part in what was to be the last major operation by Bomber Command on Berlin. They were one of the 147 crews flying aircraft from Training Command on the diversionary raid west of Paris.

On the 24th (March) the crew were briefed for the diversionary raid west of Paris. Taking off at 20.17 hrs in a Wellington X number 477 they set course from Northampton-Reading-Selsey Bill and France. All went well until they were on the return journey over the Cherbourg Peninsular when the rear gunner shouted for the pilot to corkscrew left. Roy carried out the manoeuvre immediately and as he did so tracer flew over their right wing. All the crew were now on the lookout, but there was no further sighting of the enemy aircraft. Roy then decided that they should carry out the mock attack on Bristol as they had been briefed to do. They landed at 01.07hrs and the intelligence officer was rather pleased to be able to report something different to his normal reports. The rear gunner was certain that the attacking aircraft was a FW 190. He then got a rocket from the gunnery leader – “If he had time to recognise the attacking aircraft he had time to fire at it why didn’t he.”

Roy recorded this flight as Exercise 'B/Eye', however he says they were in Wellington 447 and does not record any action. He continues the story curiously in July 1944:

"July started with Curly in deep trouble with the RAF authorities. After his last flight from Silverstone on the 11th April, he had been on leave and had then expected to be posted to a Heavy Conversion Unit. It was not to be, and his next posting was on the 19th April to 51 Base at Swinderby. This station, situated midway between Newark and Lincoln, was completed in 1940 and it was the last station to be built to pre-war specification. It first opened for flying in August 1940, then in October 1942 the conversion flights operating there were formed into No 1660 HCU. In March 1943 Swinderby was redesignated as No 51 Base, it was to be responsible for co-ordinating the training of Lancaster crews for No 5 Group. When Curly and his crew arrived there, it must have been the most overcrowded station in the UK, for not only were the Base Staff there, with the Station Staff, but also the 1660 conversion unit which was still operating. At that time there was in excess of 3,000 aircrew billeted there; it was the equivalent of a Naval Depot or Army barracks. After nearly a month of complete boredom the crews were split up and each sent to different classes of their particular trades, something they had not expected once they had crewed up and had been flying as a crew. Curly spent the next month on a navigation refresher course in a classroom. He thought these type of classes were in the past when he left Canada, but he finished the course on D-Day 6th June and then it was back to boredom. Everyone who served in the forces got to this point at some time in their service life; boredom and nothing to do left the crews to their own devices to find some way of passing the time between meals. All the air-crew who had trained in Canada or the U.S.A had learnt to play poker and bridge. While bridge players playing for a stake per 100 points settled up after their game, poker players placed money on the table. That counted as gambling and was an offence in RAF law. Curly, with the majority of the other air crew in the billet was caught in this situation playing poker. They were all put on a charge and Curly received 7 days confined to barracks. This was no hardship except at the week-end, as nearly everyone spent the week-end off station. Curly had been going home every week-end and taking with him some of his friends who lived too far away to travel home on a short week-end pass, as did the majority of the air crew who lived nearby. There were always well over a hundred confined to barracks and they had to report on parade each evening. This parade was a farce, it was usually taken by an air crew officer who was also waiting for a posting but at the time was acting as the Duty Officer. It was obvious that there were never the numbers of men on the parade as there should have been but the aircrew Officers just turned a blind eye, the men on parade just answering ‘Sir’, to their own and friend’s names when these were called out, no checks or counting took place. On Friday 17th June, which was the last day of Curly’s C.B, he asked one of his friends to cover for him on that evening parade. Curly left for a week-end at home, but it was bad luck for him and many others that the Duty Officer for that evening parade was one of the regular Base officers. It was obvious to everyone, including the Officer of the Day, that there were many men missing in relation to the numbers on the role. The Officer ordered each man to step to one side as their names were called out. Every man missing (and there were many) were sent a telegram ordering them back to base immediately. The result for Curly was that he was given 3 weeks at the aircrew disciplinary centre at Norton, Sheffield. There, it was the same routine every day, P.T. before breakfast, then foot drill, more P.T., arms drill, athletics, foot drill followed by more P.T. The only exception was Church Parade on Sundays. Curly left there on the 10th July fitter than he had ever been before and he discovered that he was quite a decent long distance runner. However, when he got back to Swinderby there was a bigger disappointment waiting for him than his 21 days at Sheffield. He had lost his crew, as they had been posted to a H.C.U. without him. Roy the pilot would not wait, as he also had had enough of 51 Base. It now meant that Curly had to wait to be crewed up with a another crew, who were short of a navigator. "

​I say this is curious as after a month at Scampton ACCS, Roy was posted to Heavy Conversion Unit 1660 at Swinderby on the 14th of May and had completed their course on the 26th of June so that must have been without Curly as he was on a course until D Day.

​Roy didn't get his new crew until they were posted in to No 5 Lancaster Flying School at Syerston on the 14th of July.

​This means he must have had a new Navigator for the whole of HCU and the first 4 exercises at LFS when he lost all his crew for some unknown reason on of after 8th July. He got his new crew and repeated exercise 3 and 4 on the 15th July continuing on to complete 5, 6 and 7 by 18th July.

​I'm very gratefully to get the names of the crew, but this has left me with more questions.