After all that they went through during the tour of 30 operations, 'Snowy' was the only one to my knowledge that Roy had regular contact with. Roy saw him when he took the first Vickers Valiant over to Australia and also on the four occasions that Snowy came over to England. Mention of Snowy was commonplace in our house when I was growing up and although I never had the pleasure of meeting him, my eldest sister stayed with Kev and his wife Shirley when she was studying at Perth University.

​Kevin James Biltoft was born on 24 Oct 1922 in Brisbane, Queensland, Australia. Snowy was recommended for a DFC after their tour by Wing Commander Millington but was instead was Mentioned In Despatches. He attended Nudgee College and wrote these memories down for the college archives:

'Kevin Biltoft remembers socialising with the crew with whom he would fly 30 operations against targets in Europe.

"We spent six or seven months training in England. We all went to Brighton first where they had two big hotels. Most of us spent three, four, five months there because evidently they had too many aircrew so we just stayed there. You’d do a few little courses in the meantime, such as a battle course, which is similar to an Army course. Apart from that we’d just play football. We went drinking every night, and even swam across a river sometimes to get home. I remember one night in Brighton – there was a blackout of course – and while walking past an English pub I heard the Nudgee War Cry. So I went in and found about half a dozen fellows from Nudgee.
Crews were generally good friends, for example I went with our pilot (Roy) to his house because he didn’t live far away. We got on pretty well with him, so the crew was made up of two Englishmen and five Australians, three of whom are still living in Australia. The mid-upper gunner is still living in Melbourne at the age of 87. The other Englishman was our engineer and he’s alive and well living on the Isle of Wight. My pilot stayed in the Air force and later flew the first Valiant bomber out to Australia. I saw him then and on each of the four trips I have made to England since the end of the war.
Apart from the war, life in the squadron was good; you had a good time. The last raid I saw on England was when I was on leave in 1944, and I stayed out on the road just to watch it. It was a bit frightening; then they had the flying bombs, we used to see them over France flying underneath us. On one leave I went to Southern Ireland which was neutral. Our pilot didn’t go as he went home, but there was another Australian pilot, the mid-upper gunner and the tail gunner came with me so we took a Lanc. The C.O arranged for us to fly because we had to get there quick because you only had nine days leave. We had to buy civilian clothes and the first night I went into a bar and there were Germans in there. They came in and we drank with them for a couple of hours, and one sold me a little Swastika made from an English sixpence, and when they left the whole bar bowed to them. They didn’t bow to us, they liked the Germans.
I went to a little bar down the road run by a woman called Hayes and she said ‘any of you boys come from Brisbane?’ I said yes, and apparently her brother was a priest there – a chaplain at Nudgee College! He was Father Hayes, a priest at the College when I was there. We went to a dance there one night and the priest in charge got up and said ‘Now girls, I think you better all rush home, there are a few Australians in the dance hall tonight’. It was a good holiday though. Generally the English were very, very good to us."

The last year of the war did not offer any relief to the College in terms of casualties, which had averaged three a month since the beginning of 1942. Although the Official History describes this period as one of operational omnipotency, a further five Old Boys were to die while serving with Bomber Command before the German capitulation in May. There were new threats, however, as Kevin Biltoft recalled :

"They had jet fighters on my last trips. I remember talking to the briefing officer when we got back, and I said we’d seen these planes and we’d never seen anything go so fast in all our lives. They never said anything but they knew what they were of course. We had no chance of hitting them, they were too fast."

Kevin Biltoft recalls arriving at 619 Squadron and being confronted with similar black humour.

"When I first arrived there were a few Canadians and Australians who said ‘You never finish a tour here boys. No one’s ever done it.’ We lost nineteen aircraft in the first month I think. My pilot went there as a Sergeant, became a Flying Officer and within a month he was the Squadron Leader because there was no one else. Anyhow we got through it all right, although we only did twenty trips, then we formed a new squadron, 227."

However not even humour and camaraderie could completely hide the harsh realities of operational flying.

"After returning from a bombing mission you’d have breakfast of bacon and eggs and you’d find out who hadn’t returned. I remember getting out of the aircraft one day and walking past another Lancaster and one of the gunners said ‘Come and have a look at this’ and we looked in the aircraft and saw a head – one of the gunners had his head shot off. Things like that would worry you quite a bit."

Another Old Boy, C. Walters met Biltoft in England in November 1944, and his description of the meeting provides a chilling insight into the stresses of operational flying.

"Kev Biltoft, who has been looking for me, as soon as he heard I was over here, happened to be on this station yesterday. I noticed someone coming towards me but did not recognise him – yes it was Kev – not the Kev I knew back in Ipswich – a different chap altogether. Quite thin, dark circles under his eyes. He has done 27 trips…you would not know at first glance it was Kev. He looked about ten years older than he really is."'

After their tour, Snowy became a Navigation Instructor before being demobbed shortly after the war's end. He sadly passed away in 2006 however I am in touch with his nephew, Bruce and hope to soon be in contact with his daughter, Jan.​​ 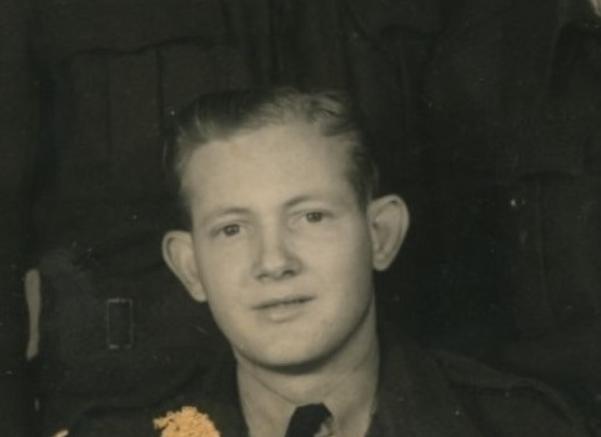 ​Click on the link below to listen to an audio interview that Snowy gave to the Australian war memorial in 1995 where he talks about his first pilot getting killed and the crew gaining Roy as a pilot. He also mentions Guy Gibson and the night he was shot down.​​